Under the directive of H.H. Sheikh Hamdan bin Zayed Al Nahyan, Ruler's Representative in Al Dhafra Region and Chairman of the Board of Directors of the Environment Agency - Abu Dhabi, EAD, the agency in coordination with Al Dhafra Municipality, has recently released a new group of Arabian Oryx into the Houbara Protected Area. 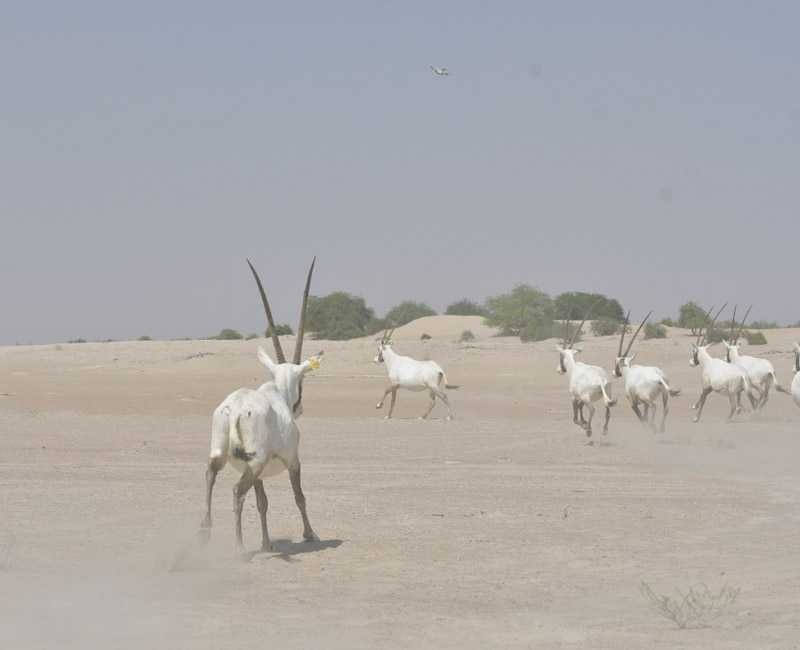 The group is the first of 100 Arabian Oryx to be released in stages before the end of the year. Located in Baynunah, the Houbara Protected Area is managed by EAD and extends over 774 square kilometres. The initiative, which is supervised by EAD, is part of the Sheikh Mohamed Bin Zayed Arabian Oryx Reintroduction Programme.

Expressing his pride with the successful release, Sheikh Hamdan said, "The Emirate is committed to preserving wildlife and endangered species, and the release of these majestic animals into the wild constitutes a moment of pride for us. This emphasises our efforts to reintroduce the Arabian Oryx, a project that was launched in Al Ain City back in 1968."

He added, "The late Sheikh Zayed bin Sultan Al Nahyan issued his directives to establish programmes to protect the Arabian Oryx, such as breeding and protecting the wild animals from extinction, whilst reintroducing them back into their natural habitat. Following this, His Highness Sheikh Mohamed bin Zayed Al Nahyan, Crown Prince of Abu Dhabi and Deputy Supreme Commander of the UAE Armed Forces, launched a similar programme in 2007, which is part of the Abu Dhabi government's vision to create a regional herd that reflects all programmes for the resettlement of the Arabian Oryx in their range countries.

"During the past few years, the UAE, specifically the Sheikh Mohamed Bin Zayed Arabian Oryx Reintroduction Programme, has played a pivotal role in protecting the Arabian Oryx, preserving it from extinction and enhancing its numbers in the wild. This has resulted in changing its status in 2011, in the Red List of the International Union for Conservation of Nature, from 'endangered' to 'vulnerable to extinction'. This is considered as one of the most important achievements in the field of the reintroduction of species on a global level."

She added: "Concurrently, it has increased the numbers in the UAE, with the country hosting more than 10,000 Arabian Oryx, 5,000 of which, can be found in the Emirate of Abu Dhabi alone, which is the largest group of Arabian Oryx in the world."

The programme extends to the Sultanate of Oman and the Hashemite Kingdom of Jordan, where hundreds of Arabian Oryx were released within their natural and historical range countries.

"EAD is keen to provide high genetic diversity within the groups of Arabian Oryx released and has taken the necessary steps to establish a "global herd" for the Arabian Oryx at the Deleika Wildlife Conservation Centre in Abu Dhabi."

The Houbara Protected Area was established in 2008 with the main objective of protecting the natural habitats suitable for breeding Houbara bustard. The reserve embraces many important animal and plant species locally and internationally. This also includes the project to protect migratory Houbara bustards from extinction.